What is ScaleSafe? | ScaleSafe 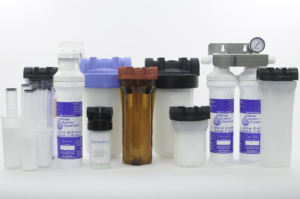 ScaleSafe is a unique composition blended to exhibit superior scale prevention and corrosion control. It is superior in the treatment of scaling caused by hard water minerals. It also controls staining caused by the precipitation of iron and manganese.

When compared to the cost of standard water softening equipment, ScaleSafe provides effective corrosion control and scale prevention at a fraction of the cost. Since ScaleSafe works on water volume, not time, there is no waste with its use. When it has dissolved, you simply replace it. A glance at the translucent housing lets you know when the replacement is needed. ScaleSafe requires no electricity, maintenance, or guesswork. The lack of moving parts makes the system virtually maintenance free.

ScaleSafe is applied as a solid block, exposing a predetermined amount of surface area from which accurate dissolution rates can be predicted. The system feeds a controlled, consistent amount of ScaleSafe into the water stream by way of a specially designed dispenser head that diverts water into the cartridge sump. This system allows for accurate feed rates and predictable treatment volumes. The dispenser heads are designed to treat water flows from as low as 2 gallons per minute to as high as 50 gallons per minute.

The most important advantage is that ScaleSafe is not affected by high temperatures and retains its full ability to alter the morphology (shape) of scale causing minerals. This provides the greatest amount of scale prevention available. ScaleSafe will remove existing scale in pipes and water fed equipment. It will also provide corrosion control in high temperature equipment.

Water is the universal solvent. It dissolves everything it comes in contact with, whether it is as “hard” as iron or as “soft” as acid rain in the air. The water we use is saturated with many dissolved minerals. The amount of dissolved minerals depends on the water source and the water chemistry such as pH, oxygen content, temperature and pressure. At extreme temperatures, its ability to hold calcium carbonate (scale) in solution is decreased. As temperature increases or decreases, calcium carbonate will begin to come out of solution and form hard water scale deposits. This causes harmful scale deposits in ice machines, water heaters and other water fed equipment.

The prevention of scale buildup on heating elements, heat transfer surfaces, walls and bottoms of boilers and water heaters is a must. According to the US Bureau of Standards, ¼ inch of scale buildup on heating elements requires 55% more energy to attain the same temperature. This translates into real dollars wasted with an inefficient water heater or ice machine, not to mention the added expense of scale removal or replacement of overworked equipment due to harmful scale buildup. ScaleSafe is a sequestering agent which when added to the water, binds with the scale causing minerals and keeps them in solution, thus preventing hard water scale from forming in the equipment. ScaleSafe accomplishes this by making hardness molecules more soluble in water and by changing the morphology (shape) of the molecule.