When researching energy and maintenance savings with ScaleSafe, it is important to first know what scale buildup is. 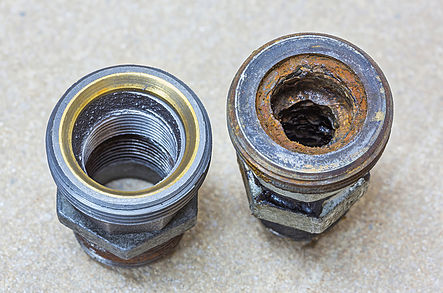 Scale in old pipe and joint after years of using

Water is used in a wide range of commercial applications. Every day, businesses and facilities heat water to serve the needs of their customers and patrons. Each year, a significant portion of their overhead is allotted to the fuel required to heat water, and every day that allotment becomes slightly larger. However, many do not realize what they lose each year due to the negative by-products of heating water.

Water is often called the “universal solvent”, because it dissolves most substances with which it comes in contact. Water contains dissolved minerals, such as calcium-carbonate (lime), magnesium, silica, iron and phosphate. The amount of these dissolved minerals in water varies throughout the country and from municipality to municipality. However, 85% of this country’s area is served with water containing concentrations of dissolved minerals sufficient to form scale.

When water is heated, it undergoes a chemical reaction that causes the dissolved minerals to “precipitate” out as solids. The amount of precipitant, or scale, is directly proportional to the volume of water used and its temperature.

Scaling and corrosion will inevitably cause efficiency losses, malfunctions and total equipment failure. It is responsible for millions of wasted dollars each year in maintenance cost and energy consumption.

Scale has a very low thermal conductivity. In fact, it acts as a better insulator than a conductor for heat transfer. The thermal conductivity of a typical lime/scale deposit measured in Btu/hr/ft2/in/oF ranges from three to seven. As a comparison, the thermal conductivity of copper is 2680 and steel is 460. It is easy to see that a heat transfer surface which has accumulated a scale build-up will have a less efficient heat transfer process. This means that the metal surface must be hotter for the same amount of heat to be passed through both the metal surface and scale accumulation then into the water. If enough scale is present, the metal overheats, causing distortion, embrittlement and eventual failure of the water heater. In fact, as little as one-fourth of an inch of lime scale on the heat exchanger can increase utility costs by as much as 50% and cause equipment failure in as little as two years.